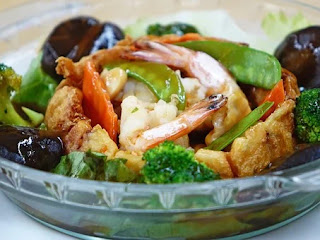 Like many cultures, food is a central part of Chinese heritage and identity. Unfortunately, many loved and commonly eaten Chinese dishes are high in fat and drenched in sodium-packed sauces. That’s not to say you can’t indulge every once in a while, but it’s important to know your best bets for preparing or ordering a healthy Chinese food meal.

During holidays, such as Chinese New Year, deep-fried meats, egg rolls, dumplings, and cakes are served, making it difficult to eat healthfully during the holiday season. Plus, anytime you walk into a Chinese food restaurant in the United States, the menus are full of meat-centered, oily meals served with heaps of carbohydrates. But these choices do not represent the traditional Chinese diet.

Traditionally, steamed vegetables have been the main staple of Chinese food. These steamed vegetables and tea, combined with only occasional red meat and minimal fried food, led to immense health benefits for Chinese people. Their traditional plant-based diet has been shown to be one of the main factors in decreased rates of heart disease, diabetes, and obesity among rural Chinese people.

Another main staple of the traditional Chinese food diet is rice. For a healthier, more fiber-filled side dish try eating brown rice instead of plain white rice. Sandra Wong, D.O., a family medicine physician with the Palo Alto Medical Foundation, says there are also many healthy options for noodles, which are also popular in Chinese food culture.

Soba noodles are made from wholegrain buckwheat flour, making them a good source of protein, fiber, potassium, and B vitamins. When choosing udon noodles and rice noodles, Dr. Wong says to opt for whole wheat and avoid their less nutritious counterparts.

Dr. Wong says shirataki noodles, which are made from the root of the konjac yam, are extremely healthy as they are high in fiber and water. A popular weight-loss food, these noodles are low in carbohydrates as well as calories and are naturally gluten-free. They also contain a type of soluble fiber called glucomannan that, when combined with water, drastically increases in volume. This promotes a sense of fullness and helps aid in stool elimination.

Terence Lin, M.D., internal medicine and interventional cardiology specialist with the Palo Alto Medical Foundation, says healthy carbohydrates are important, but it’s easy to eat too much of a good thing if you aren’t mindful of your eating habits.

“The proper portion size for rice and noodles is generally about a half-cup cooked or one-quarter cup if measured dry. This is one serving, and is about the size of half of a tennis ball,” Dr. Lin says.

When you are cooking a meal or going out to a restaurant, remember that there are many options that are both healthy and represent authentic Chinese food. In addition to selecting a healthy carbohydrate, try to choose a low-sodium, low-fat vegetable dish with chicken or tofu as your main course. Identify healthy choices that you can consistently follow in order to make successful lifestyle changes.

Instead of eating your favorite salty or oily dish every day or once a week, only eat it once a month as a special treat. Get your family on board to designate one day a month for your favorite dish, and stick to vegetable-based dishes for the rest of the month.

Reduce the amount of cooking oil you use.

Instead of frying food with cooking oil, try steaming, boiling, roasting or stewing your food with alternative ingredients. For example, instead of cooking oil, use rice wine, tomato juice, ginger, garlic, pepper, or other low- or non-fat seasonings and cooking ingredients.

For roast duck, take a serrated knife and cut off the fat in between the skin and the meat. For roast pork and other meats, cut off the pieces of fat before eating.

Avoid eating the skin on meat, or only eat half of the skin that is put on your plate. Avoid eating any high-sodium seasoning traditionally served with the dish.

Often at Chinese banquets, there are several bottles of soda in the middle of the table. If you really love soda, try drinking one cup of soda with ice. After that, stick to water or tea. Avoid soda outside of these special occasions.

Avoid eating instant noodles, such as Cup of Noodles, Instant Lunch or Top Ramen, as they have extremely high levels of sodium and fat. If your family does give you some to eat, try limiting the amount of seasoning you put into the broth to half of the packet. Alternatively, try putting some additional water into the noodle mix in order to dilute the sodium and fat content.

Tips for Eating at a Chinese Restaurant

Choose your main course wisely. Avoid fat, salt, and excess carbohydrates. Pick something from the vegetarian section. Eat a dish with tofu as a source of protein, instead of beef or pork.

Cut down on your portion size by sharing a plate and an appetizer with a friend or family member. Pack your food to take home when it arrives to avoid overeating.

Avoid eating too much fish that is high in mercury, such as shark fin.

Fill up on soup.

Drink tea or water, not soda or alcohol.

Eat fruit as a dessert instead of other sweetened desserts. Skip the fortune cookie as it’s not even a Chinese treat.

Ask for the sauce, such as sweet and sour sauce, on the side.

Eat with chopsticks to slow down your meal.

Chinese food is very nutritional, but it is also very balanced and provides everything your body and metabolism needs to be healthy.